What happens when you mix a unique look with an outgoing personality and add a big dash of feline charm? You get a truly amazing breed of cat: the Cornish Rex.

The Cornish Rex got his start in England, where in 1950, a barn cat named Serena gave birth to a litter of kittens. Serena lived on a farm in Bodmin Moor, a granite moorland in northeastern Cornwall. Her owner, Nina Ennismore, noticed that one unique kitten stood out among the other babies. He had tight rows of curly, cream-colored hair and looked a little bit like a lamb. Ennismore named the kitten Kallibunker.

As Kallibunker grew, his looks became even more unusual. He had a slender, fine-boned body, long legs, a narrow head and huge bat-like ears. While Ennismore thought Kallibunker was unique, she didn’t quite realize just how special he was. When she took him to her veterinarian to be neutered, the vet instead recommended she consult with a noted British geneticist named A.C. Jude about this unusual cat. After Jude saw Kallibunker, he realized the cat represented a previously unseen genetic mutation. He recommended that Ennismore breed Kallibunker back to his mother with the goal of producing more kittens with this unique appearance. The result of this breeding was successful: Serena produced more curly-coated kittens.

In an attempt to expand this gene pool, Ennismore test-bred Kallibunker’s offspring with Burmese, Siamese and British Domestic Shorthair cats. These breedings demonstrated that the curly-coat gene seen in Kallibunker was recessive and that breeding two curly cats together created only curly-coated kittens.
In 1956, Life magazine published an article on Kallibunker, showing pictures of him and one of his curly kittens. This brought notoriety to the new breed, and a year later, an American breeder imported two “Rex” cats, as they were called then, to the United States.

So began the history of the Rex cat in America. By 1962, the Cat Fanciers’ Association started registering the breed. Years later, in 1984, the breed name was changed to Cornish Rex to help differentiate it from the related Devon Rex cat, another curly-coated breed with a similar history. 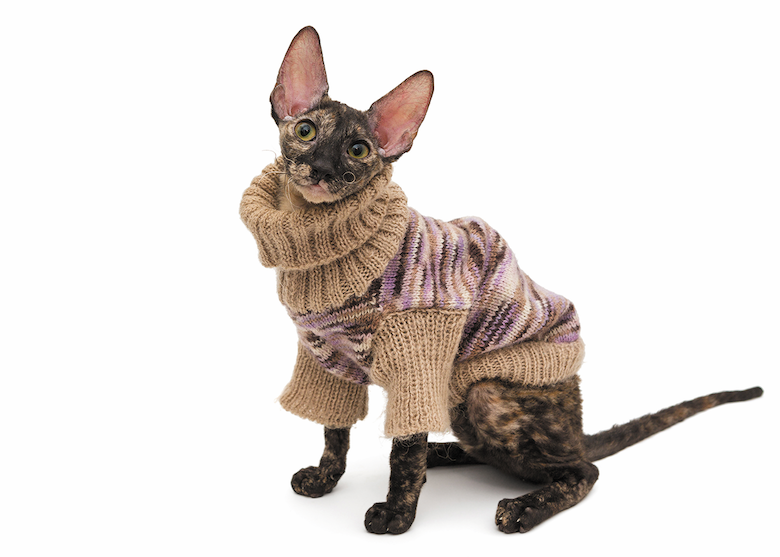 Cornish Rex only have an undercoat,
so they’re more temperature-sensitive than the average cat. They can get too cold (or too hot) easily. Photo: rozmarina | Getty Images

When it comes to exceptional looks, it’s hard to beat the Cornish Rex. The breed is distinguished from other cats by its extremely soft, wavy coat and its “racy” body type.

“They are referred to as the Greyhounds of the cat fancy and are very refined,” says breeder Bob Baratto in Port Saint Lucie, Florida. “They have big-belled ears, an arched back and are wavy coated from head to tail.”

Cornish Rex are surprisingly heavy in weight for a cat with such a lithe body. They are also warm to the touch. This is good, because they do like to be handled. In fact, their outgoing personalities are one reason the breed is so popular with cat lovers.

“The Cornish Rex is a highly interactive animal,” Bob says. “They are loving, inquisitive and intelligent. They adapt to any home as long as they aren’t left alone all day.”

The myriad of colors and patterns seen in the Cornish Rex is another one of the breed’s more appealing features. Solid Cornish Rexes can be found in pure white; dense, coal black; light blue; deep, brilliant red; buff cream; rich, warm, chocolate brown; and rich lavender, with pinkish tones.

The Cornish Rex is one of the cat fancy’s most unique and special breeds. These friendly, cuddly cats make wonderful companions.

Fishing for Habitat in Texas

Giant manufacturing corporations are against mining in Atewa Forest, Ghana