We have known for a long time that migratory songbirds navigate in a combination of ways. Our Founding Editor Eldon Greij noted in a past column that “Birds have internal compasses that can determine directions from the sun’s position during the day, star patterns at night, and Earth’s magnetic field.”

Now, new research shows for the first time that birds that fly off course can find their way back to their migratory route using the magnetic field.

The team from Bangor and Keele Universities studied the Eurasian Reed Warbler, a species that breeds in much of Europe and parts of Asia and winters in sub-Saharan Africa. Their study was published today in Current Biology.

Researchers found that the warblers can navigate from a “magnetic position” beyond what they have experienced in their normal migration route, back toward that correct route.

Top map: Eurasian Reed Warbler breeding range (green) in Europe and variation in the geomagnetic signature (total magnetic intensity, magnetic inclination and magnetic declination). The natural migratory direction from the study site (white dot) toward Africa during autumn is shown as black arrow. The expected compensatory direction from the simulated site (black star) is shown as white arrow. Circular diagrams: Left: orientation of birds experiencing the natural magnetic field at the study site in Austria. Right: orientation of birds experiencing the simulated magnetic field of a site in Russia while still being at the study site in Austria. Arrows depict the respective mean group direction. Black dots show the orientation of the individual birds tested. Image courtesy of the authors

Adult birds already familiar with their migration route, and its general magnetic signatures, were held in captivity for a short period before being released back into the wild, and they were exposed to a simulation of the Earth’s magnetic signature at a location thousands of miles beyond the birds’ natural migratory corridor. The study site was in Austria, and the warblers were placed in a device that simulated the magnetic field of a site in Russia.

Despite remaining physically located at their capture site and experiencing all other sensory clues about their location, including starlight and the sights, smell, and sounds of their actual location, the birds still showed the urge to begin their journey as though they were in the location suggested by the magnetic signal they were experiencing.

They oriented themselves to fly in a direction which would lead them “back” to their migratory path from the location suggested to them by the magnetic signals they were experiencing.

This shows that the Earth’s magnetic field is the key factor in guiding Reed Warblers when they are blown off course.

“The overriding impulse was to respond to the magnetic information they were receiving,” explained Richard Holland of Bangor University’s School of Natural Sciences.

“What our current work shows is that birds are able to sense that they are beyond the bounds of the magnetic fields that are familiar to them from their year-round movements and are able to extrapolate their position sufficiently from the signals. This fascinating ability enables birds to navigate toward their normal migration route.” 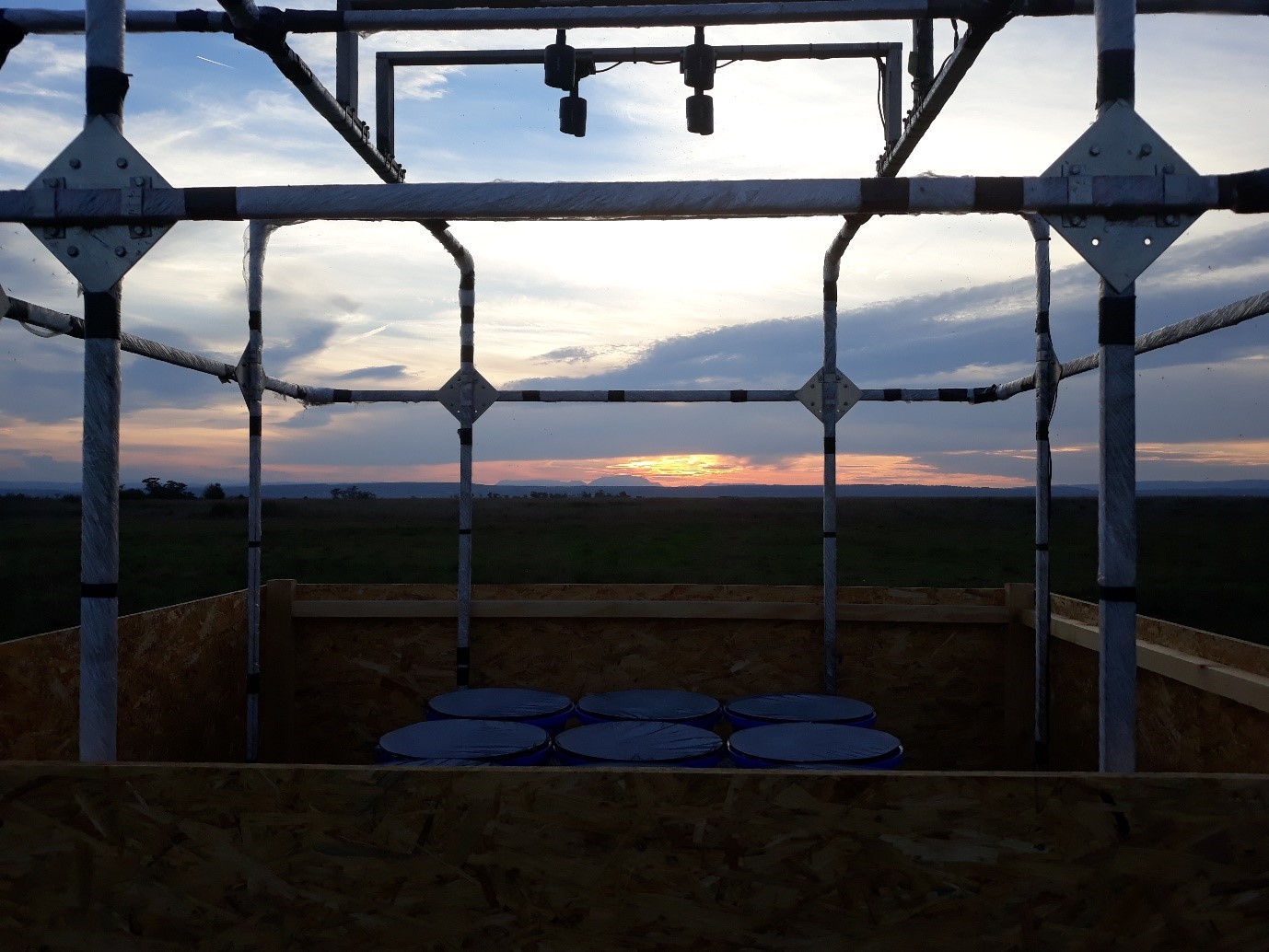 The magnetic set-up used in Austria to simulate a displacement of birds off-course by exposing them to the magnetic field of the Russian site. Photo by Florian Packmor

“What these birds are achieving is ‘true navigation.’ In other words, they are able to return to a known goal after displacement to a completely unknown location without relying on familiar surroundings, cues that emanate from the destination, or information collected during the outward journey.”

Florian Packmor of Bangor University, one of the co-authors, added: “We have already shown that the Reed Warblers use the same magnetic cues experienced within their natural range, but this study shows that they can extrapolate what they understand about how the magnetic field varies in space far beyond any previous experience they have had.”

Questions remain about whether the birds have an accurate “map” or are just using a “rule of thumb” measurement to judge the general direction of travel needed to get back on course.

The Eurasian Reed Warbler was selected for the research, but the findings could probably be applied to other migrating songbirds, the researchers say.

Thanks to Bangor University for providing this news.

Sign up for our free e-newsletter to receive news, photos of birds, attracting and ID tips, and more delivered to your inbox.

Keys to attracting orioles to your garden